It's possible people haven't been this excited about the arrival of a new year since the turn of the millennium. The death of George Michael was the final, crushing blow in a year that's been a total fail for everyone except Donald Trump.
But there's hope in the promise of a new beginning, so we've got serious cause for celebration. And if you want to watch things go kablooey (like all of your naive dreams for 2016), here are the best places to watch fireworks on NYE.
Bye, 2016. Don't let the door hit you on the way out.
1. New Year's Eve Party Cruises
Drinking champagne on a yacht might be the most Miami way to ring in 2017.
Yachts depart various locations between 8 and 9 p.m. Tickets start at $129. Visitnewyearscruise.com.
2. City of Miami Beach New Year's Eve Celebration
Watching fireworks from the sands of South Beach never gets old.
Ninth Street and Ocean Drive on South Beach. Fireworks start at midnight. Free. Visitmiamibeachfl.gov.
3. Pitbull's New Year's Eve Revolution
Mister Worldwide himself will ring in 2017 from downtown Miami, broadcast live on Fox. If you're into the luxe stuff, there's also a pay-for-play VIP Food & Wine Party with eats by the Magic City's own chef Michelle Bernstein.
Bayfront Park (301 N. Biscayne Blvd., Miami). Free. Party starts at 8 p.m. Visitworldwidenye.com.
4. Gale Hotel Rooftop Party
Drink and eat your fill with five hours of open bar and an extravagant dinner buffet, all set to tunes by DJ JASE. Toast to the new year while checking out the exploding lights.
Gale Hotel (1690 Collins Ave., Miami Beach). Party starts at 8 p.m. Tickets cost $139. Visit galehotel.com.


6. Mondrian South Beach
Dive into an open bar while listening to tunes from curated DJs.
Mondrian South Beach (1100 West Ave., Miami Beach). Open bar starts at 8:30 p.m. Tickets start at $179. Visit morganshotelgroup.com.
7. Rusty Pelican's Cuba to Miami
Choose from two Cuba-themed soirees in which to spend your evening: Havana Nights or the Tropicana Club.
Rusty Pelican (3201 Rickenbacker Cswy., Key Biscayne). Havana Nights starts at 10 p.m.; cost is $200 per person. The Tropicana Club starts at  9 p.m.; cost is $275 per person. Visit therustypelican.com.
8. Jaya at the Setai
Eat, drink, and watch the fireworks from beneath a new retractable roof.
Jaya at the Setai (2001 Collins Ave., Miami Beach). New Year's Eve menu offered at 6:30 p.m. for $175 per adult and $90 per child and 8:45 p.m. for $395 per adult and $210 per child. Visit thesetaihotel.com.
9. Biltmore Hotel
The Gables' most opulent spot has several options for NYE, including dinner at its two restaurants and a gala complete with fireworks.
Biltmore Hotel (1210 Anastasia Ave., Coral Gables). Seating for dinner at Fontana ($120 per person) or Palme d'Or ($185) at 6 p.m. The gala ($425 per person) starts at 8 p.m., and fireworks begin at midnight. Visit biltmorehotel.com.
Posted by Fabrizio Cacciatore
Email ThisBlogThis!Share to TwitterShare to FacebookShare to Pinterest 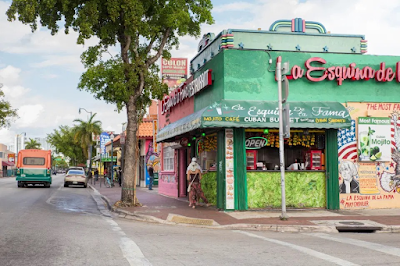